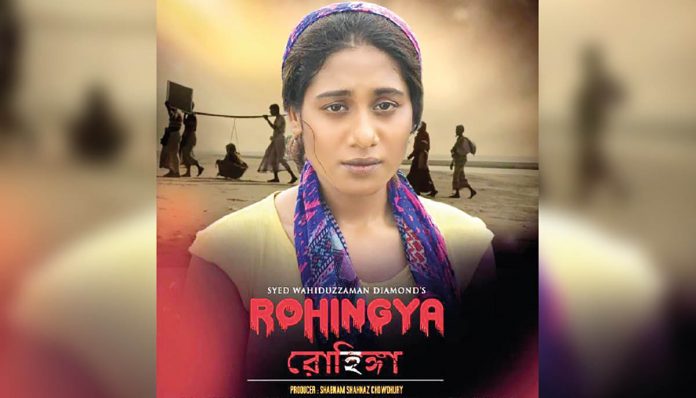 The director has also unveiled the poster of the film.

‘I have been observing the Rohingya crisis for years. The idea of making a film to depict the crisis came to my mind in 2012 when the then secretary general of the United Nations visited Myanmar,’ said Syed Wahiduzzaman Diamond.

‘When the Rohingya people started fleeing to Bangladesh in 2017, I began the film’s shooting. I submitted the film to Bangladesh Film Censor Board in October of 2021. The film received an uncut censor certificate,’ he added.

The Rohingya revolves around Rohingya families who were evicted from their homes in Myanmar and took shelter in Bangladesh.

The Rohingya is the seventh film of Syed Wahiduzzaman Diamond. He has previously directed films, namely Nacholer Rani, Gangajatra, Antordhan, Shesh Kotha and others. He has also directed 52 small screen productions.

‘Although the Rohingya crisis is an international issue, it has impacted Bangladesh a lot internally. In the film, I have tried to portray how the society, education and way of life of people living in Cox’s Bazar have been impacted after the Rohingya people took shelter there. The film aims to highlight the Rohingya crisis in a broad sense,’ concluded Syed Wahiduzzaman Diamond.