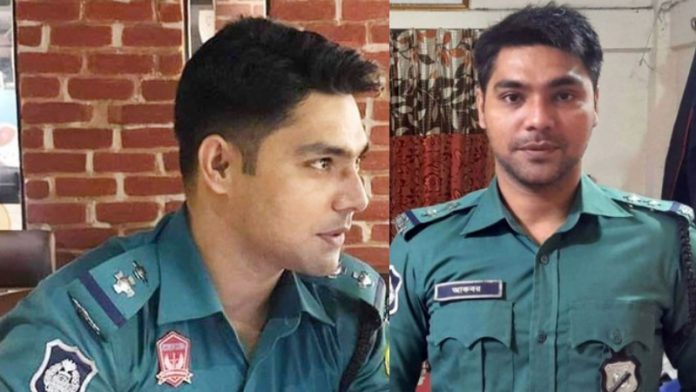 How crooked can a cop get?
This was answered to some extent when former Teknaf OC Pradeep Kumar Das landed in jail over the murder of Major (retd) Sinha and reports on his misdeeds surfaced.

Now Akbar Hossain Bhuiyan, former in-charge of Bandarbazar Police Outpost in Sylhet city, suspended and absconding following the custodial death of Rayhan Ahmed on October 11, is another case in point.

Hailing from Bogoir village of Ashuganj upazila in Brahmanbaria, Akbar joined as a constable in 2007, and in 2014, was promoted to sub-inspector.

Being posted to Bandarbazar on November 6 last year, he walked in the footsteps of previous corrupt in-charges and other policemen in these small outposts, but took it even further.

Victims are now talking
Several street hawkers and shop owners of Bandarbazar and Zindabazar areas, the main commercial zone of the city, alleged that they had to pay the “collectors” from the outpost to avoid false cases.

Not only in the streets, his corrupt reign extended to private homes.

Being denied, the SI filed a drug case against Mukta showing a seizure of 21 yaba tablets, his brother alleged to the media.

Another victim is Jinat Lisa of the Khadimpara area, who called 999 on April 17 this year as her husband was being attacked during an altercation with several locals.

Akbar, arriving at the spot, took the side of the locals, alleged Jinat. One of the attackers — a woman — kicked Jinat, then five weeks pregnant, in the stomach in front of the SI, she said.

Akbar then detained her husband, filing a case against the couple after failing to get the Tk 10,000 he demanded from them, she said.

The couple got bail but Jinat had a miscarriage a week later.

Meanwhile, Akbar has also been accused of falsifying the investigation report of 25-year-old Shahjalal University of Science and Technology student Md Taifur Rahman Pratik, whose hanging body was recovered from his house in the Kajalshah area on January 14 last year.

Following Rayhan’s death earlier this month, Pratik’s sister Shanta Tawhida posted on Facebook on October 16, claiming that Pratik was murdered outside and SI Akbar then staged it as suicide.

She stated in her post that the SI in the investigation report did not mention that CCTV footage from the building was missing for two days — the day of the incident and the day before — and altered several things in the report to declare it a suicide.

CYCLE OF CORRUPTION
Following Akbar’s suspension after Rayhan’s custodial death, a new sub-inspector Sahin Miah was assigned as the in-charge of the outpost on October 14.

After a previously viral video of the new SI gambling in a secret gamblers’ den resurfaced after his posting, Sylhet Metropolitan Police withdrew him.

The next in-charge of the outpost was SI Hasan Uddin, previously second-in-command at Bandarbazar outpost.

However, he too was suspended on Wednesday, according to an SMP press release, after his involvement in helping Akbar abscond was found.

Akbar has been on the run since October 12 and the Police Bureau of Investigation, now in charge of the investigation, has alerted all immigration posts not to let him out of the country.

While the case filed by Rayhan’s wife on October 12 accused several unnamed people — on Tuesday, one of the suspended constables, Titu Chandra Das, was arrested and taken into remand by PBI in this connection.

Abdul Karim Kim, coordinator of Sankhubdho Nagorik Andolon in Sylhet, said, “No police outposts in the SMP area serve the people, but rather collect money illegally.

“The policemen paid good money as bribes to get posted there and they try hard to recover it. The system that promotes such corruption must be stopped.”❐