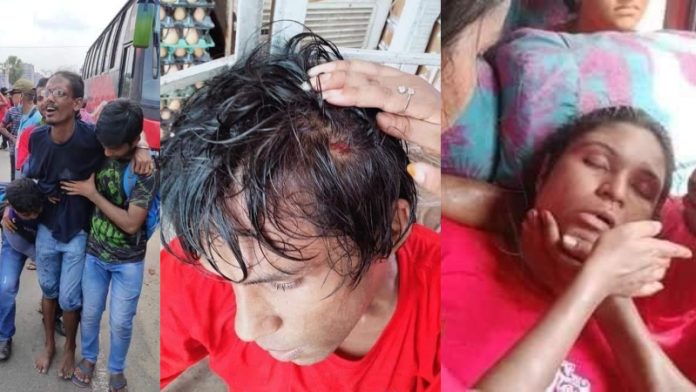 A long march by anti-rape protesters from Dhaka to Noakhali came under attack in Feni earlier today.

The protesters started the long march yesterday to realise their nine-point demand amid growing incidents of rape, sexual harassment and violence against women across the country in recent times.

He alleged that police first attacked them when some of the protesters were painting on the wall in the area.

“When we tried to move towards our bus, some miscreants broke into our procession and attacked us,” he said.

“They ransacked our bus,” he said, adding that some of the protesters and a driver were injured in the attack.
“We were supposed to hold a rally in Dagonbhuiyan upazila. I got information that Jubo League and Chhatra League activists have taken position there. So, we cancelled the rally,” he alleged.

“Our rally at Chowmohoni is still uncertain but we will hold a rally in Maizdi,” Hriddho said.

Additional Superintendent of Police in Feni, Mainul Islam, told The Daily Star that it was “not an attack”. A scuffle broke out there after the rally, he claimed.

“There were photos of the local lawmaker at the rally where derogatory comments were made against him. In protest, his followers brought out a procession. Activists from the long march chased followers of the lawmaker and a scuffle ensued,” he said.

Around 450 protesters, including left-leaning parties, socio-cultural ogranisations, students, youths and rights activists, started the long march under the banner of “Bangladesh against Rape and Impunity” to press home their nine-point demand, from the capital’s Shahbagh area around 10:30am yesterday.❐

US to honour Bangladesh’s request for AstraZeneca vaccine, hopes Momen

Woman victim in viral video is from Bangladesh; Incident happened in India