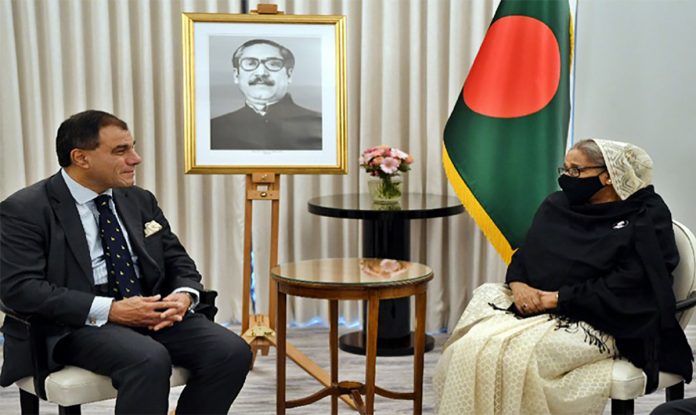 Bangladesh prime minister Sheikh Hasina on Friday invited the UK businesses to avail of the investment opportunities in Bangladesh.

She made the call while Lord Karan Bilimoria of Chelsea, also president of the Confederation of British Industry, called on her at her place of residence in London.

Lord Bilimoria briefed the prime minister about his work in support of the UK’s curry industry.

According to a press release, the PM flagged her government’s efforts to promote vaccine development research and Bangladesh’s readiness to partner with international institutes or businesses with interest in the matter.

He is the first South Asian of Parsi background to sit in the UK’s House of Lords.

Prime minister Hasina paid tribute to the contributions of Lord Bilimoria’s late father General Faridoon Bilimoria of the Indian army during Bangladesh’s War of Independence in 1971.

She recalled the sacrifices made by many from the Indian armed services for the cause of Bangladesh’s independence.

She also mentioned her efforts to honour the memory of the Indian martyrs by introducing a scholarship for their descendants during her visit to India earlier this month.

Lord Bilimoria expressed interest in forging higher education partnership with Bangladesh in his capacity as the Chancellor of Birmingham University.

He invited the Hasina to the University to speak on a topic of her choosing.

The Bangladesh PM briefed the Lord about the growing start-up scene in Bangladesh, and the work done under the auspices of ‘Digital Bangladesh’.

They both mourned the demise of Queen Elizabeth II and paid tribute to the late monarch’s extraordinary life of service and dedication.