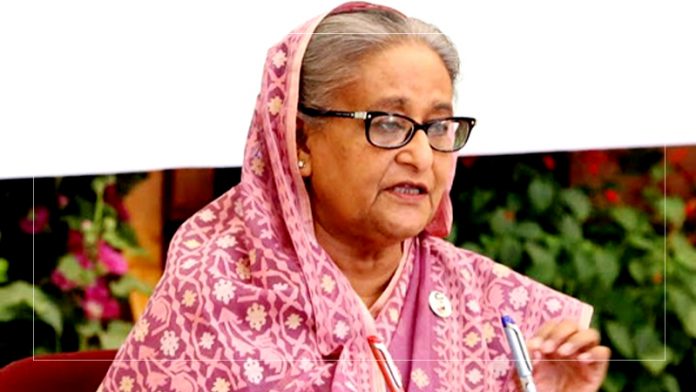 Prime Minister Sheikh Hasina has described the adoption of the “Dhaka-Glasgow Declaration” in the COP26 conference as an outcome of playing a leading role by Bangladesh in climate diplomacy.

“I believe that the “Dhaka-Glasgow Declaration” adopted by the heads of the government and state of the most 48 climate-vulnerable countries led by Bangladesh in the just-concluded COP26 Summit (the 26th session of the Conference of the Parties) was an outcome of the leading role played by our country in climate diplomacy,” she said.

The prime minister came up with the statement while addressing a press conference on Wednesday arranged to brief media about her 14-day official visit to the United Kingdom and France, reports BSS.

Journalists from various print and electronic media were present at Ganabhaban and Prime Minister’s Office (PMO) in Dhaka.

Sheikh Hasina said the major feat of the COP26 is that heads of the state and government of the world agreed to further accelerate the climate funding process including allocation of $100 billion every year keeping consistency with the Paris Agreement and Sustainable Development Goals (SDGs).

“A total of 141 countries including Bangladesh pledged to check all kinds of deforestation move by 2030,” she added.

Noting that UK-based news agency – BBC – in its recent report selected her as one of the five deal-makers of COP26, Sheikh Hasina said: “I feel honour to this end considering the achievements of Bangladesh’s growing economic capacity and the people’s trust in our Moral Foreign Policy.”

Highlighting her visit details, the premier said she returned home in the morning on November 14 last after the end of her two-week visit to the United Kingdom, France, and Glasgow, Scotland, the venue of the United Nations COP26.

The prime minister said she attended six multilateral and five bilateral meetings in the main part of the COP26 World Leaders’ Summit and side events on two days.

She said in the post-Covid world, as the incumbent Chair of the Climate Vulnerable Forum-CVF, an organisation of 48 countries, her participation in the COP26 was very important for protecting the interests of Bangladesh and CVF member countries.