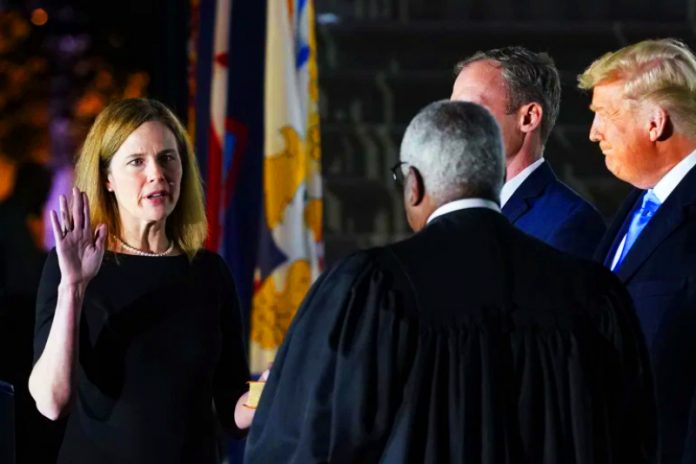 Amy Coney Barrett was confirmed to the Supreme Court Monday along a near party-line vote, cementing a strong conservative majority on the nation’s highest court just over one week before Election Day.

With a 52 to 48 vote, Republicans put Barrett on the Supreme Court for a lifetime appointment without the support of a single Democrat. Sen. Susan Collins of Maine was the only Republican to vote against Barrett. The speed of the confirmation process, the stakes for the balance of power on the Supreme Court and the proximity to Election Day are expected to motivate voters on both sides of the aisle to express their support or dismay over the outcome at the ballot box.

Historically, the courts have been a stronger catalyst for Republican voters to head to the polls than for Democrats, conservative and liberal groups agree. But that might change this year. Progressive judicial advocates say the courts are finally becoming as much of a rallying cry for their base as they traditionally have been for conservatives. “With the election so close, a lot of people are channeling their anger and outrage into electoral action,” says Chris Kang, chief counsel of progressive judicial advocacy group Demand Justice.

In the weeks since Justice Ruth Bader Ginsburg’s death, a constellation of conservative groups have thrown money and support behind Barrett’s nomination on a larger scale than for either of Trump’s two previous Supreme Court nominees, three communications professionals who helped coordinate the effort say. The major organizations in this ecosystem on the right, including Judicial Crisis Network, Heritage Action for America, Club for Growth and others, spent nearly $30 million in total to support Barrett’s nomination, according to these professionals.❐