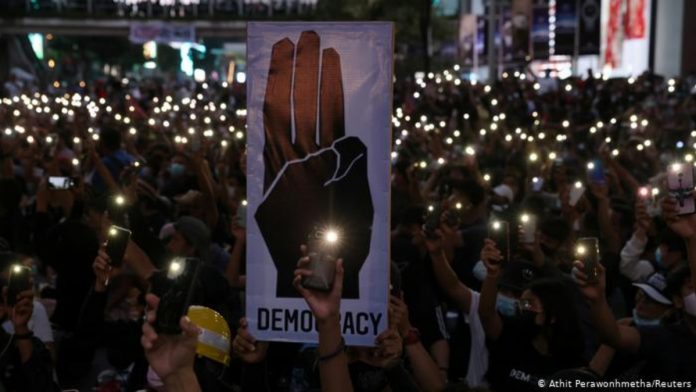 Thai police fired water cannon and teargas at protesters marching on parliament yesterday, and at least 18 people were hurt in the most violent confrontation since a youth-led protest movement emerged in July.

The protests have become the biggest challenge to Thailand’s establishment in years.

Demonstrators converged on parliament to put pressure on lawmakers discussing changes to the constitution. Protesters also want the removal of Prime Minister Prayuth Chan-ocha, a former army ruler, and to curb the powers of King Maha Vajiralongkorn.

Protesters have said they do not want to abolish the monarchy.

Police sprayed water cannon at protesters who cut through razor-wire barricades and removed concrete barriers outside parliament. Officers then fired teargas. Thousands of protesters gathered at different points and the number grew into the evening.

Lawmakers were discussing several proposals for constitutional changes, some of which would exclude the possibility of altering the monarchy’s role.

There is also discussion of the role of the upper house Senate, which was entirely selected by Prayuth’s former junta and helped ensure that he kept power with a parliamentary majority after last year’s disputed vote.

Some protesters scuffled with dozens of yellow-shirted royalists who had remained behind after an earlier demonstration by hundreds of right-wing Thais calling on lawmakers not to make changes to the constitution.❐

Aleksei Navalny is arrested on his return to Moscow

UK to close all travel corridors from Monday