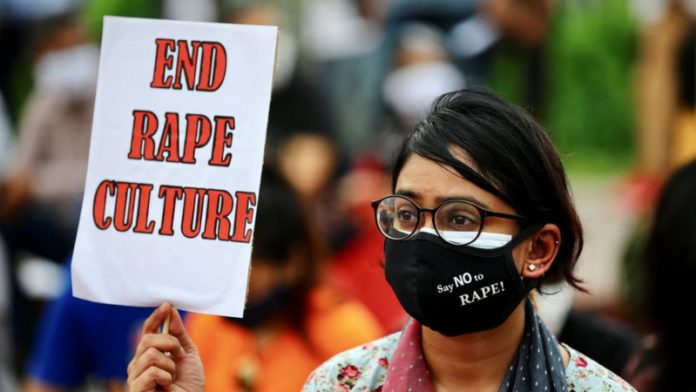 Bangladesh is to introduce the death penalty for rape cases, following days of protests about the country’s high level of sexual violence against women.

Law Minister Anisul Haq told the BBC that the president would issue an ordinance on Tuesday making it law.

There was widespread outrage in Bangladesh last week after footage of a brutal gang assault on a 37-year-old woman went viral on social media.

At least 1,000 rapes have been reported in Bangladesh this year, activists say.

But many cases go unreported because women fear they will be stigmatised, according to human rights advocates, and in cases that are reported conviction rates are extremely low. Protesters galvanised by last week’s viral video have demanded faster trials and changes to the way rape cases are prosecuted.

An investigation by Bangladesh’s National Human Rights Commission found that the woman in the viral video, who was attacked in the southeastern district of Noakhali, had been raped repeatedly over time and terrorised. Eight men were arrested after the video emerged.

In a separate case another woman was allegedly gang raped last week in a hostel in the northern district of Sylhet, leading to the arrest of several members of the student wing of the ruling party.

Bangladesh was rocked over the weekend by an unprecedented level of protest. Demonstrators carried signs reading “Hang the rapists” and “No mercy to rapists”. In the capital Dhaka, a mock gallows was erected by protesters.

Responding directly to the protests, the government decided to make the change by way of an ordinance, since parliament is not sitting – effectively passing it directly into law.

This year alone, more than 1,000 rapes were reported in Bangladesh, according to a human rights group in the country. A fifth were gang rapes.

It was the case of one 37-year-old last week which sparked the recent protests and in many ways forced the government to take this action. The UN has now weighed in, saying the gang rape in Noakhali underlined the “state of social, behavioural and structural misogyny” in Bangladesh.

At the weekend, Ananta Jalil, a well known actor, posted a video in which he said women who wore revealing dresses were inviting rape. After criticism, he issued a statement of clarification, but it appeared to simply double down on his initial remarks.

Many have welcomed the government’s decision to introduce the death penalty, but gang rapes have continued to make headlines in recent days, and some say it will take more than the death penalty to fundamentally shift attitudes towards sexual violence in Bangladesh.

‘Strong political will crucial to ensure rights, dignity of migrants’

Bus falls off viaduct in Brazil, killing at least 17